Warning: array_rand(): Array is empty in /home/superbeet/dev.beet.tv/wp-content/themes/beettvv3/header.php on line 81

Advertisers are shifting their media spending to streaming platforms not only to reach audiences, but also to steer them toward the lower parts of the purchase funnel. In that way, connected television (CTV) resembles digital media with its more immediate performance metrics.

“Interestingly, we have been working with the streaming television publishers and partners to bring it more and more into a performance play for our clients,” Minnie Dimesa, executive vice president of advanced media and marketing at Icon Media Direct, said in this interview with Beet.TV. “All the media dollars that we invest and we spend on their behalf have to have a return on investment.”

Metrics like cost per order and cost per acquisition are more feasible with CTV and over-the-top (OTT) channels. As a result, Dimesa has seen some advertisers move their television budgets entirely into streaming video.

“In the last three years, this area has exploded, especially for performance marketers as measurement capabilities have come into place,” she said. “We are now at the point where many of our clients have integrated streaming TV into their evergreen strategy.”

Tracking pixels are a key part of measuring ad campaigns on streaming video, similar to digital platforms that rely on the technology to measure when a view takes an action in response to a marketing message. Streaming video also provides marketers with the ability to deliver richer media experiences to consumers on the biggest screen in their households.

“It is pixel-based, which is beautiful because it’s one-to-one, so very much like digital where you understand exactly who and where your ad impressions are being served to,” Dimesa said. “I always like to refer to streaming television as the beautiful intersection of linear television and digital advertising.”

As advertisers seek greater efficiencies in their media spending and broader reach, some are supplementing their social media campaigns on streaming platforms or looking for other options, Dimesa said.

“We do have quite a number of our clients who have come to us because…Facebook isn’t working for them anymore, or it’s gotten cost-prohibitive or maybe they’ve hit their cap on how much they can scale on Facebook,” she said. “Now, they’re looking for an alternate channel. We do see some of our clients actually diverting funds from, say, what would traditionally be a Facebook budget to a connected TV, streaming TV channel.” 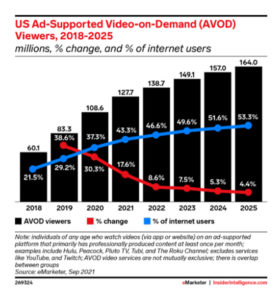 Paid search advertising will continue to remain viable as a way to engage consumers in the lower part of the purchase funnel.

“When your consumers are now searching for your brand, you’re there to be found, and you’re essentially answering their call,” Dimesa said.

Like digital platforms, streaming video offers greater flexibility in automated media buys. Marketers can choose from private marketplaces (PMPs) with a curated selection of media outlets, or try different strategies to get the right inventory most efficiently through demand-side platforms (DSPs).

“The beauty of DSP/programmatic platforms like Roku is that it gives you access to pretty much all the publishers out there,” Dimes said. “How you’re purchasing that inventory could be different.”

She recommends testing platforms to find the best method to reach audiences and possibly generate a response if that’s the goal. because you’re now then beholden to a certain spend amount, or you’re not having to commit to four weeks

“DSP/programmatic platforms allow you to do that in a low-risk situation,” Dimesa said. “Rigorous testing and continuous testing is very critical in terms of being able to find success within the streaming TV platforms.”

You are watching “How Marketers Can Go TV Streaming First,” a Beet.TV leadership series presented by Roku. For more videos, please visit this page.